This is an english translation of my post entitled “NFT : encore plus stupide”.

The goal of an NFT is to establish a property deed. The idea is to certify an association between a digital identity (the owner) and an object (the property, a digital asset most of the time), and to then use a blockchain to store and distribute this certificate.

It’s off to a bad start: people claiming to be able to assert ownership using a blockchain are either lying or have no idea what they are talking about. This was already pointed out in a previous post (that should probably be read before this one) where I explained that a blockchain cannot serve as a source of truth for anything that is not intrinsically “inside” the said blockchain. This technology thus has no advantage over paper[1] for this purpose. It has however many inconveniences: power consumption, the impossibility of having actual peer to peer transactions, etc.

NFTs are supposed to allow decentralization and disintermediation (getting rid of the need for trusted third-parties). This in itself is enough to discredit NFTs, since an NFT is a property deed on a blockchain, and that precisely, blockchains cannot actually offer any decentralization nor any elimination of the need for trust, as demonstrated in the post linked in the previous paragraph. Still, as the title of this post suggests: NFTs are even more stupid. 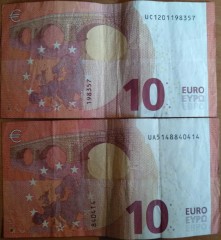 NFT stands for “non-fungible token”: it is a non-interchangeable piece of data, as opposed to units of cryptocurrencies for example. When someone has 1 bitcoin, they have 1 bitcoin, whichever it is: they’re all equivalent in the strict sense of having the same value. Each NFT is unique and identifiable. A 10€ bill has the same value as any other 10€ bill (or as any other set of bills and coins that sums up to 10€): euros are fungible. Now, if we decide that 10€ bills are no longer in circulation but that we keep them and open a market of 10€ bills where each one is unique and identified by its serial number, then I can hope to sell my 198357 numbered bill at a higher price than my 840414 numbered bill for example, by saying that its serial number is prime and that there is a limited quantity of such bills (which is false then idiotic, but I can still say it…).

This idea illustrate what is meant by “non-fungible”. The fact is that numbering objects that are available in limited quantity can increase their value[2]: not only they are rare, but now they are unique since each has a different number. However in the case of NFTs, it is even more stupid: absolutely nothing prevents to make multiple NFTs for the same object (so there can be multiple certificates of ownership for a single artwork, for example), and anyone can make an NFT for anything (so there is no guarantee whatsoever that a person selling an NFT owns the associated object). Everything is as if a same 10€ bill (in the sense of the physical object, necessarily unique) could have an inifite number of serial numbers, and that it is to these serial numbers that we attribute value, and potentially different values to each one. I know, this makes absolutely no sense.

It is actually even more stupid: the object associated to an NFT is generally a digital object, whose rarity does not exist[3] since they are transmissible by copy (as opposed to my 10€ bill that I would no longer have in my possession if I give it to someone else). This means that the object associated to the NFT (and which obviously contributes to its value on the market, even though we have already seen in the previous paragraph that this does not make sense) can itself be replicated infinitely. This may seem obvious, and yet there are many cases of people who bought an NFT to use its associated object (an image file) as a profile picture on social networks and called thieves people who would retrieve the image by a simple right click and then “save image as…”, for example.

All these criticisms are valid even if we accept the idea that an NFT would indeed be a property deed, but in reality it is even more stupid. In principle, at least from the point of view of the proponents of this technology, having an NFT associated to the object (digital or not) X allows to say “I am the official owner of X, I have a certificate that proves it”. The thing is, the notion of ownership is anything but natural, it does not exist as anything else than a social construct. Ownership can be the result of a (maybe litteral) power struggle[4] or of a common agreement, but in both cases it is a form of violence. In the first case, the power struggle has to be constantly renewed. In the second case, it is necessary that a third-party enforces the agreement, with an ability to punish in case of disrespect, or an absolute power of constraint. In both cases, the notion of ownership exists and has a meaning only for the concerned community[5]. In short, a property deed has no intrinsic value if there is no third-party to enforce its application and thus giving it its value. This is true when the deed is written on a piece of paper, and it stays true when it is an NFT: by recording on a blockchain that a given person is the owner of a given object, one does not perform anything more than if they would have written this same statement on paper: it has absolutely no value if there is no third-party with the ability to enforce what is written, to make it true[6]. Once again, the idea of decentralization or disintermediation is gone…

Now hang on, there is more. The association of an object to an NFT is usually not recorded directly on the blockchain for technical reasons (even digital objects are too big for that). Note that even in the rare cases where it would be the case, everything said until now still holds perfectly. What is stored on the blockchain is most often a link to a web page[7] that itself points to the associated object. Here again, we have lost all idea of decentralization (which is supposed to be why this technology exists in the first place — even if, as we have seen, this belief is based on a huge misunderstanding of what a blockchain can do), since a centralized platform is necessary to link an NFT to its associated object. This is bad enough, but things are even more stupid: because of this necessary and centralized third-party, an NFT can be subject to link rot in the best case (for example if the centralized platform no longer exists or moves to another URL). But it could be worse: the website could be hacked and/or later be replaced by one that does fancy associations, displays ads, attempts to infect its visitors with viruses, or simply trolls.

It is terefore quite clear that NFTs are purely and entirely hot air and have no possible serious applications (except of course to enrich the higher stages of a Ponzi scheme while accelerating global warming). But let’s take a closer look at the non purely speculative use case that is the most often put forward by the proponents of this technology: its use in a metaverse or in video games (I will talk about “virtual worlds” in general) for “in-game” markets.

What makes this idea seem to work is that in the case of a virtual world in which we have control over everything, we can indeed decide that a given blockchain where NFTs are recorded is a source of truth. Technically, it works. The virtual world can completely prevent participants who are not identified as owners of an NFT to benefit from the associated object. The company which builds the game, through the implementation of the virtual world (that is, the rules that they write in its source code), plays the role of the centralized third-party that has absolute power to make whatever they want true, and thus among other things what is written on a given blockchain. If the company changes its mind, the truth in the virtual world changes with it… And again, it is even more stupid. Contrary to what has regularly been said on the subject, it would absolutely not allow the transfer of items from one virtual world to another if this is not intended in the source code of both virtual worlds: if a game does not have code to display a yellow hat on your avatar, even if you own an NFT associated with the idea of a yellow hat in another game, you wont be able to add a yellow hat to your avatar in this game even if the game takes into account the blockchain where that NFT is recorded. NFTs cannot be used to build a “second hand” market of items between players of a same virtual world either if the virtual world does not implement the possibility of ownership transfer (which it could perfectly decide to allow but only with a tax, for example). To sum up, anything other than a speculative market of (re)selling fake property deeds to gullible buyers depends entirely on the will of the centralized entity that controls the virtual world. Therefore, we are dealing with centralized systems, where there is no advantage to use NFTs, or a blockchain. Technically, there a many disadvantages: it will cost more resources and be less efficient than a simple database to achieve the same results.