The Truth on the Blockchain

This is an english translation of my post entitled “La vérité sur la blockchain”.

For a few years now, blockchains have been so hyped that they have been put to all sorts of uses. Blockchain-based projects are multiplying without any consideration for the actual necessity of a blockchain for these projects. It seems that this is entirely due to a fashion effect (itself the result of a blinded technological solutionism ideology), and to the subsequently available fundings…

Mostly, these projects consist in recording information on a blockchain and claiming that doing so provides some form of guarantees. For example, we regularly see projects that aim at putting traceability, notarized deeds, or even diplomas in a blockchain, claiming that doing so will ensure the security and the validity of these information while allowing disintermediation.

It is important to understand that the goal of a blockchain is to achieve distributed consensus[1]. That is, to allow a set of autonomous systems to agree on a common information, 1- without the need for any centralized authority, and 2- in an adversarial context (nobody trusts anyone). When this specific need is not a requirement, there is no need for a blockchain. 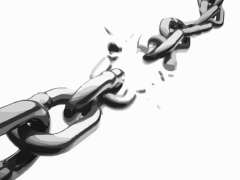 This said, it is already quite obvious that many blockchain-based projects do not make any sense, starting with all those which are built around a permissioned or a centraly controlled blockchain, but also all those which aim at bypassing the need for a central authority even though this third-party is intrinsically necessary.

Let’s take the example of diplomas. An official dipoma is necessarily delivered by some state-authorized higher education institution, typically a univesity. Recording diplomas on a blockchain thus makes no sense since only the institution which delivered a given diploma can certify it’s authenticity. This means that there is a central authority that is essential for the certification of the diploma, without any regard for how the diploma exists, whether it is as a piece of cardboard paper or in a digital form. Therefore, there is no need for a blockchain, and actually it happens that using one is counter-productive. If digital certification of diplomas is useful, it is possible to do so more effectively and less expensively without a blockchain (and we know perfectly how to implement it: this is how we manage TLS certificates, which are used for secure HTTP connections, for example).

The thing is, the problem with blockchain-based projects is actually more profound. What many people do not seem to understand (or do not want to), is that, as a rule, what is recorded on a blockchain has no truth value in the real-world, if it is not enforced by an external authority. In the exact same way that a contract written on a sheet of paper only has a meaning and value as long as all parties agree to it, or as long as there is a third-party that has the ability to coerce recalcitrant parties to honor the contract.

Thus, writing an information on a blockchain is only interesting if it is the writing itself that defines the truth. That is to say that it is a performative writing. It is the case with cryptocurrencies, where the balance of a given wallet[2] is computed from the transactions written on that cryptocurrencies’ blockchain, i.e., where the truth (for a very local notion of truth that only exists “inside” the said blockchain) is defined by what is written.

We must not confuse what we write because we have has decided (otherwise) that it is true, and what is true because it is written.

Apart from cryptocurrencies, I have never seen any other example of justified[3] use of a blockchain. For good reasons: we just demonstrated that as soon as what is recorded on a blockchain concerns something that is external to this blockchain, then the use of a blockchain adds strictly no more guarantee than writing on a sheet of paper. Therefore, in such situations, blockchains can only be a replacement for paper and for paper only (a replacement that is less practical, less efficient, more expensive, more polluting, less respectful of privacy, etc.). Hence, all the institutions and authorities that exist and are necessary to give any meaning and value to the sheet of paper are still necessary. By using a blockchain, one pays the cost of decentralization in a trustless environement, without having decentralized anything at all nor eliminated any need for trust.

UPDATE (june 2022) : More than 1500 experts warn against the use of blockchains and more broadly of crypto-assets in an open letter to the US Congress: https://concerned.tech/.